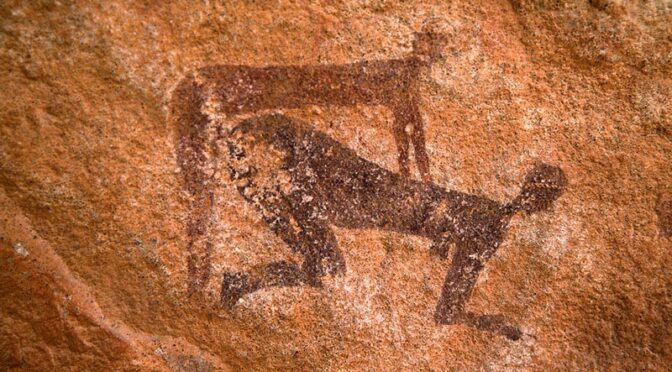 Just Outside the Desert Oasis of Djanet, Algeria, there’s a national park brimming with pieces of the past. A trip through the alien-like landscape of Tassili n’Ajjer is like stepping into an open-air art gallery, where the sandstone rock formations become canvases for more than 15,000 prehistoric carvings and paintings.

Tassili n’Ajjer shot into worldwide fame in the 1930s, not for its landscape but for the precious collection of ancient rock art in the area.

Since their discovery, more than 15,000 petroglyphs and paintings have been identified representing 10,000 years of human history and environmental change.

One of the most striking features of these petroglyphs is the way they evolved with the change in the climate.

The oldest art belongs to the so-called “Large Wild Fauna Period” (10,000-6,000 BC) characterized almost entirely by engravings of animals such as hippopotamus, crocodiles, elephants, giraffes, buffaloes and rhinos, depicting the abundant wildlife at a time when the Sahara was green and fertile.

Humans appear as tiny figures dwarfed by the immensity of these animals and are often shown holding boomerangs or throwing sticks, clubs, axes or bows.

Overlapping with this era is the Round Head Period (8,000-6,000 BC) where human figures with elaborate attires took dominance. These figures ranged from a few centimetres to several meters tall.

The majority of Round Head paintings portray people with round featureless heads and formless bodies. Some of the pieces seem to suggest shamanism with bodies flying through space or bowing before huge male figures that tower above them.

About 7,000 years ago, domesticated animals began to appear in art. This period is known as the Pastoral Period. Rock art from this period reflects a changing attitude towards nature and property.

Human figures became more prominent, and man was no longer shown as part of nature but portrayed as being above nature, yet able to derive sustenance from it.

Wild animals gave way to cattle and stock. Later drawings (3500 years ago) depicts horses and horse-drawn chariots. It’s unlikely that chariots were ever driven across the rocky Sahara, so researchers believe the figures of chariots and armed men are symbolic, representing ownership of land, or control of its inhabitants.

As the climate became progressively drier, horses were replaced by camels as evident from the rock art from the most recent period about 2000 years ago.

Tassili N’Ajjer lies about 500 meters above the level of the desert. The plateau can only be reached by climbing on foot, with camping materials and supplies drawn by donkeys and camels.

Large diurnal temperature variations and the absence of basic amenities make the trip extremely challenging, so only the young and the hardy attempt to reach it. Recent violence and insecurity in the country have further isolated Tassili N’Ajjer from the routes of most tourists.