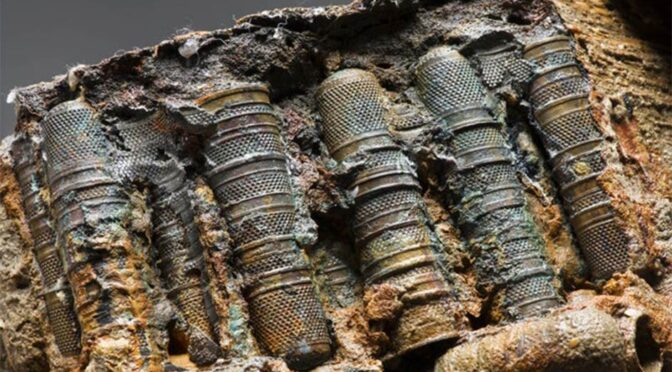 Tons of items retrieved from the wreck of a sailing boat from the Dutch East India company will be scanned by new X-ray equipment to reveal hidden details.

In January 1740, after landing on Goodwin Sands, the Rooswijk [ a so-called ‘ retrochip ‘ built on long travels ] sank off Kent Coast. Archaeologists visited the wreck and recovered many artifacts — including silver coins and ingots, wooden chests, and a brass wine pot — between 2005 and 2018.

Due to a £150,000 grant from the Wolfson Foundation to upgrade Historic England X-ray equipment, many of these objects will now be examined in more detail.

Originally destined for Batavia — modern-day Jakarta — the merchant ship Rooswijk sank around 5 miles (8 kilometers) off of the British coast on its second voyage to the East, with none of its believed 237-strong crew surviving the accident.

Its wreck was first discovered at a depth of 79 feet (24 metres) by an amateur diver back in 2004 — with the bulk of recovery efforts taking place between 2005 and 2018, with the objects from the vessel legally belonging to the Dutch state. Among the artefacts recovered from the wreck were bars of silver, gold coins, knives, scabbards, human remains, pots, jars and thimbles.

The grant from the Wolfson Foundation charity will be used to upgrade the power and resolution of the equipment at at Historic England’s large, walk-in X-ray facility for scientific and archaeological analysis at Fort Cumberland, Portsmouth.

The existing facility has been at that centre of the organisation’s archaeological assessment, analysis and conservation work.

When the upgrade is complete, Rooswijk artefacts will be among the first to be scanned by the revamped facility, in a collaboration between Historic England and Rijksdienst Voor het Cultureel Erfgoed, the Netherlands’ cultural heritage agency.

Many of the finds from the wreck are covered with hard concretions of matter that will require the extra power of the new equipment to be successfully scanned.

‘With this new technology, we will be able to analyse, conserve and better understand many more objects recovered from historic shipwrecks or excavated from archaeological sites.’

‘We are very grateful to The Wolfson Foundation for their support to this vital grant.’

The new X-ray machinery will also ‘greatly improve’ the analysis of Roman-era artefacts, Historic England said — as the scanner will be able to penetrate dirt and debris build-ups around such objects without the risk of damaging them.

‘We are excited to support this important piece of equipment – bringing together Wolfson’s longstanding interests in science and heritage,’ said Wolfson Foundation chief executive Paul Ramsbottom.

‘The beauty of X-ray technology is the way in which it reveals hidden secrets of the past as well as helping with conservation.’

‘We are particularly delighted to be supporting the heritage sector at this challenging moment for us all.’