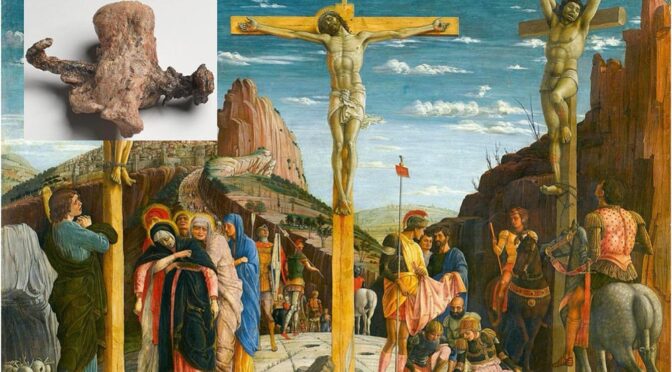 A recent study about a man’s crucifixion in Northern Italy 2000 years ago that was only the second direct discovery of the man executed by such a method, is shedding light on how Jesus Christ was killed.

In 2007 in Venice, the skeletal remains were first discovered by Emanuela Gualdi, a medical anthropologist at the University of Ferrara, but recently published research explores more thoroughly how the man died.

The report, a collaborative effort by researchers from the Ferrara and Florence universities, examined a lesion and unhealed fracture on one of the heel bones of the man, suggesting that his feet had been nailed.

“We found a particular lesion on the right calcaneus [heel bone] passing through the entire bone,” Gualdi said.

She noted that Roman crucifixions were made to cause as much pain as possible for a prolonged period, with prisoners and slaves having their feet and wrists nailed to a wooden cross, sometimes taking several days to die.

As the Romans often left the bodies to rot or be eaten by animals, little direct evidence of people who have died from crucifixions remains. In some cases, the victims were removed and buried, but the metal crucifixion nails would be salvaged from their bodies.

Gualdi said that in the case of the man discovered in 2007, his wrists appear to have been tied to the cross with a rope, which was also a method practiced at the time. The researcher noted that many questions remain around the man, given that he was buried directly in the ground without any burial goods, rather than being placed in a tomb.

“We cannot know if he was a prisoner, but the burial marginalization indicates that he probably was an individual deemed dangerous or defamed in the Roman society,” she said.

Genetical and biological tests of the remains have determined that the subject was between 30 and 34 years of age when he died, and would have been of below-average height and slim nature.

The first-ever direct discovery of a crucifixion victim was made during excavations of Roman sites in Jerusalem in 1968 when a 7-inch-long nail was found in the heel bone of a man in one of the tombs. Various researchers and experts have talked about the brutality Jesus Christ faced at His own crucifixion at the hands of Roman soldiers.

Lee Strobel, a Christian apologist and former legal journalist for the Chicago Tribune, released in 2016 an updated version of his New York Times best-seller The Case for Christ: A Journalist’s Personal Investigation of the Evidence for Jesus.

In the book, he teamed up with Dr. Alexander Metherell, a physician who detailed the gruesome details of how Jesus was tortured and killed on the cross.

Metherell explained in the book that when Christ prayed in the Garden of Gethsemane before he was captured, he sweated blood out of distress, which is a rare medical condition called hematidrosis.

“What this did was set up the skin to be extremely fragile so that when Jesus was flogged by the Roman soldier the next day, his skin would be very, very sensitive.

Roman floggings were known to be terribly brutal. They usually consisted of 39 lashes but frequently were a lot more than that …” he explained.

He said that Jesus’ wrists had nails driven through them, which would have held up His body, and went through the median nerve.

“Do you know the kind of pain you feel when you bang your elbow and hit your funny bone … well, picture taking a pair of pliers and squeezing (as he twists his hands) and crushing that nerve. The pain was absolutely unbearable,” he noted, adding that Jesus’ feet were also nailed.