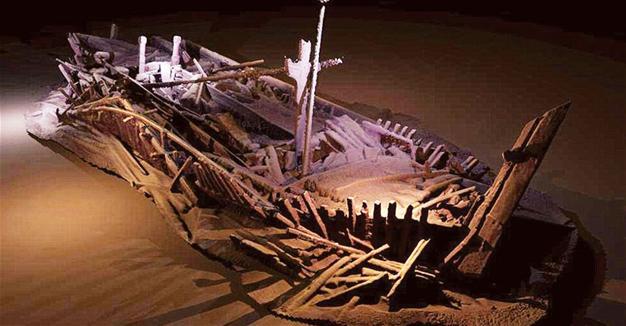 Over 40 ancient shipwrecks discovered in the Black Sea

Marco Polo himself may have recognised this medieval trading ship. It’s one of the 40 or so shipwrecks newly discovered on the bed of the Black Sea north of Turkey. Some of these vessels sank when the Byzantine Empire was in its heyday 1000 years ago, and some during more recent Ottoman times.

Others sank in the 13th century when Marco Polo was plying his trade across the globe. Most other wrecks from these time periods have been found in much shallower waters, where they have been eaten away down to just their hulls.

But the new haul was preserved for centuries on the seabed thanks to low-oxygen conditions that prevent the decay of timber. As a result, the architecture of the upper deck appears in unprecedented detail, allowing historians to see how well the features match up to historical accounts.

They were rediscovered by submersibles scouring the seabed as part of a project to piece together how and when sea levels rose again in the Black Sea following the last ice age, which peaked 20,000 years ago.

The Black Sea Maritime Archaeology Project has uncovered 41 wrecks this year so far, revealing them in all their glory thanks to a state-of-the-art imagery method called 3D photogrammetry.

“We took thousands of high-quality stills and video around the whole of each wreck,” explains Jon Adams at the University of Southampton, UK, and principal investigator on the project. “Software calculates the positions of millions of points in 3D space, generating accurate, detailed 3D images of each wreck.”

Adams says that the medieval ships have never been seen in such a well-preserved state. “We’ve never seen them this complete,” he says. “Normally, it’s just bits of the lower hull, but here we have much upper-deck material.”

One of the medieval ships – found 1100 metres down – was probably an Italian trading craft from around the 1300s, of a type that Marco Polo would recognise. Although its iron-fastened hull planks have fallen to the seabed, it retains the stern platform with its rudders intact.

“The mast is also still standing, with the yardarms lying on the deck,” he says. “We can still see rigging and pots on board.”

It also has features of more ancient ship technology, such as “quarter rudders” on each flank at the ship’s rear for steering, rather than the single centre-line stern rudder that became the norm in around 1400 and beyond.

Other wrecks were also beautifully preserved. An Ottoman trading ship from a few centuries later retained many deck features, including masts. In addition, images show a beautifully carved tiller with coils of rope hanging from the timbers at the ship’s rear.

Because they all sank far out at sea, Adams believes that these were trading ships rather than ships sunk in battle. “They’re all a long way offshore, so they were probably overwhelmed by rough weather,” he says.