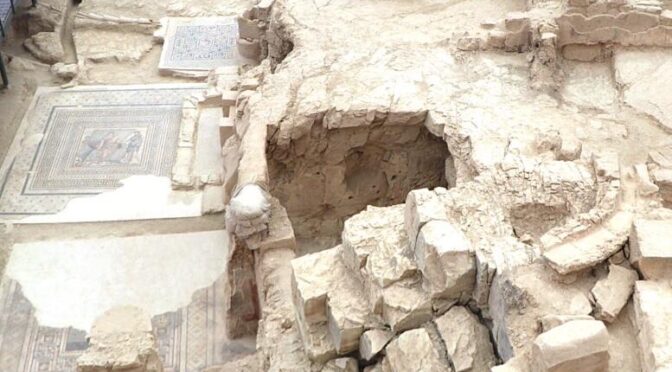 Rock-Cut Chambers Unearthed in Turkey’s House of the Muses

Within the scope of ongoing excavations in the ancient city of Zeugma, located in the southeastern province of Gaziantep’s Belkıs district, two rock chambers have been unearthed in the area previously discovered and called the “House of Muses” due to the mosaics on its floor.

Professor Kutalmış Görkay, the head of the excavations, said that the rock chambers would be opened to visitors after the completion of the works.

The excavations, which started in 2005, are ongoing in the ancient city of Zeugma, which is located on the Euphrates River in the form of two cities facing each other.

Recently, two rock chambers were brought to light in the House of Muses, which was discovered in 2007.

After taking this weight on it, we started excavating inside the rock chambers. Work is still continuing in this chamber, where the earth inside was emptied. We will provide the protection and reinforcement of these chambers. In particular, there are risky cracks on the ceilings in the chamber.

We will complete the excavations in the other rock chamber this year, too. Later, we plan to open these areas to visitors by taking protective measures and ensuring room security with injections or steel structures.”

Pointing out that the rock chambers were used as dining rooms and that the mosaics unearthed from the house carry traces of intellectual life, Görkay said: “Muses are the most important personifications of classical Greek education, especially in antiquity.

In the mosaic found in this house, goddesses and personifications believed to contribute to Greek literature, history, poetry and music are depicted.

We named it the ‘House of Muses’ because of this mosaic. When we found the Muses mosaic in 2007, we decided to continue our work. The house shows us traces of the intellectual life of its owner at that time.”

Stating that the ancient city of Zeugma was one of the most important cities in Anatolia, especially on the Eastern Roman border, Görkay said that the excavations in the House of Muses, which have been ongoing since 2007, provided important information about the private lives, personal preferences and identities of the inhabitants of Zeugma.

“When we look at the places and the general structure of the house, we think that Zeugma belonged to a family having better than the middle-class economy.

These houses may have one or two courtyards. Courtyards are areas where air and water enter, where rainwater is collected and used as water collection basins. In these wet areas, we see more water-related scenes.

The courtyards of these houses were also used for dinner parties. The courtyards were filled with water, helping the house to stay cool during hot weather.

The two rock chambers found here may also have been used as dining rooms. We are currently working on reinforcement. We aim to open them to visitors as soon as possible,” he said.