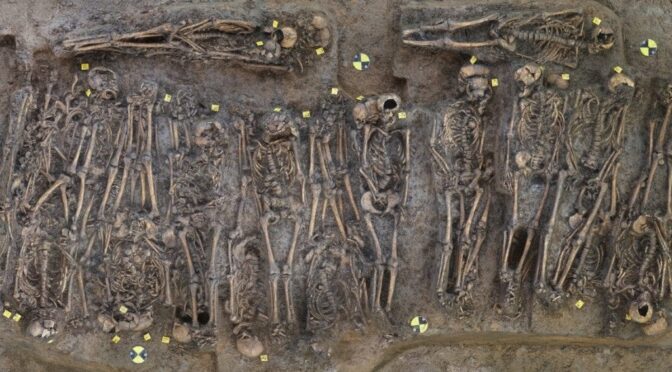 More than 80 British soldiers who were buried in a mass grave in the Netherlands 200 years ago died of disease rather than during combat, archaeologists have revealed. The mass grave, which contains 82 skeletons, was found by chance in the town of Vianen in November 2020.

The soldiers buried there are believed to have died during the Flanders Campaign of 1793-1795, in which the British fought the French.

The campaign was part of the First Coalition war, which pitched post-revolutionary France against an alliance made up of Britain, Prussia, Russia, the Netherlands and Austria.

Now, analysis of some of the remains has shown that the soldiers endured extremely tough conditions, both in civilian life and after they joined up.

Instead of dying of sabre wounds, musket bullets or artillery fire, they died of disease.

“Most of them died of illness rather than fighting on the battlefield,” Hans Veenstra, an archaeologist, told The Telegraph.

“The conditions in which they lived were extremely poor. They slept in small tents in all weather, their food was not of good quality and there were all kinds of bacteria that had the chance to spread disease.”

The mass grave was found close to the site of what was a British military field hospital, which was set up in December 1794.

Of the six skeletons which have so far been examined with isotope analysis of their bones, three are believed to be British – two came from Cornwall and another from a town somewhere in central England. Two others are of possible English descent, while the sixth was German.

“That is not particularly strange because German forces were fighting with the British during the Flanders campaign,” said Mr Veenstra, from De Steekproef, a Dutch archaeological research company.

A mass grave found during research for the new canal

The mass grave was found by chance when archaeologists were conducting research in the area prior to plans to excavate a new canal.

“It was a big surprise, it was found purely by accident. The chances of finding so many bodies, centuries later, is very small,” he said.

While the average age of the soldiers was 26, some were teenagers.

They were buried in wooden coffins but without their uniforms. “Those would have been taken by the army and given to other soldiers,” said Mr Veenstra.