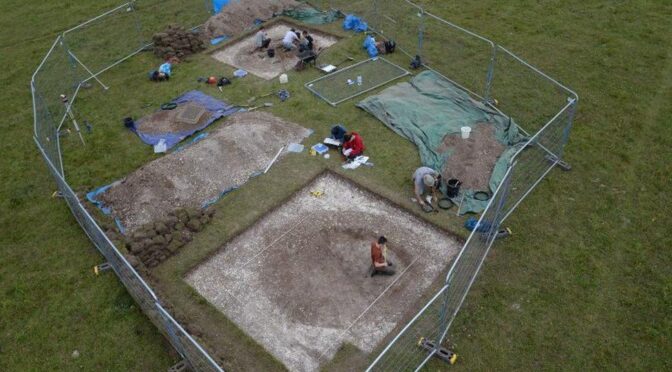 Thousands of pits believed to have been used by prehistoric hunters have been unearthed near Stonehenge. The find, by University of Birmingham and Ghent University researchers, included sites over 10,000 years old.

One of the pits, which was 13ft (4m) wide and 6.5ft (2m) deep, was the largest of its kind in northwest Europe, the archaeologists said.

The discoveries were made using a combination of novel geophysics and “traditional” archaeology, they added.

The researchers said the pits, dating from between around 8,200 BCE and 7800 BCE, showed hunter-gatherers had roamed the landscape during the early Mesolithic period when Britain was re-inhabited after the last Ice Age.

The discovery was partly made with a technique known as electromagnetic induction survey, which uses the electrical conductivity of soil to provide information that can be used to find materials underground.

It was the first extensive electromagnetic induction survey undertaken in the Stonehenge landscape, according to the University of Birmingham.

Paul Garwood, senior lecturer in prehistory at the University of Birmingham, said what had been discovered was “not a snapshot of one moment in time”.

“The traces we see in our data span millennia, as indicated by the 7,000-year timeframe between the oldest and most recent prehistoric pits we’ve excavated.

“From early hunter-gatherers to later Bronze Age inhabitants of farms and field systems, the archaeology we’re detecting is the result of the complex and ever-changing occupation of the landscape.”

Dr Nick Snashall, the archaeologist for the Stonehenge and Avebury World Heritage Site, said the team had revealed some of the earliest evidence of human activity yet unearthed in the Stonehenge landscape.

“The discovery of the largest known Early Mesolithic pit in northwest Europe shows this was a special place for hunter-gatherer communities thousands of years before the first stones were erected,” Dr Snashall said.