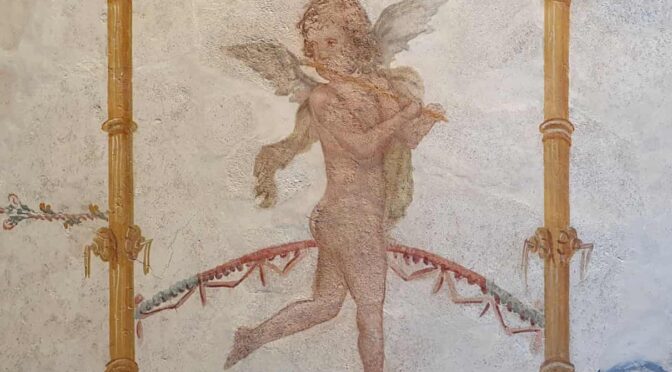 Three of the frescoes were retrieved by Italian police last year, while the others were discovered during the 2012 bust of illegal excavation.

Fragments of six frescoes once stolen from the walls of ancient Roman villas were returned to Pompeii in a ceremony at the archaeological site on Tuesday morning.

Three of the frescoes were recovered by a local Italian cultural heritage protection unit last year as part of a larger investigative effort to crack down on the illegal trafficking of ancient artefacts.

The objects were believed to have been taken from Stabia, an archaeological site located near Pompeii, in the 1970s, before being promptly smuggled out of the country. By the 1990s, they had been sold to collectors in America, Switzerland, and England.

The fragments from this group, which have been dated back to the first century, depict a dancer, a cherub, and the bust of a woman. They were not in the UNESCO database of stolen cultural assets when found, according to a statement from the Archaeological Park of Pompeii.

The other three frescos were discovered in 2012 when Italian police disrupted an illicit archaeological dig in Civita Giuliana, a villa located roughly 2000 feet north of the walls of ancient Pompeii.

The incident led to the establishment of a state-sponsored excavation at Civita Giuliana in 2017. It was there, in 2020, that archaeologists discovered a ceremonial chariot and the remains of a master and his slave, who were killed in the eruption of Mount Vesuvius.

“The return of these fragments is significant for several reasons,” Massimo Osanna, the Italian Ministry of culture’s general director of museums, said in a statement.

“Each finding constitutes an important piece of the history and knowledge of a place and must always be protected and preserved.

But above all, it is a victory of legality, against the phenomenon of illicit excavations and the trafficking of works of art and ancient finds, and a confirmation of the important role of the police in the protection of cultural heritage.”