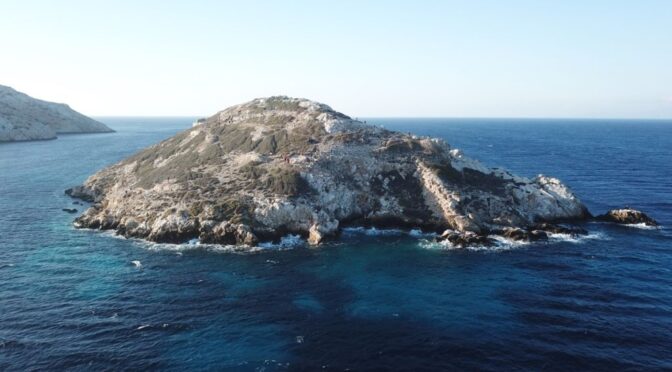 The origin of Greek Civilization on a Pyramid Island

A new discovery has possibly revealed the origin of Ancient Greek culture. In a remote and uninhabited pyramid-shaped islet, archaeologists have found evidence of a rich cultural and monumental landscape dating from earlier than the Minoan period.

The evidence so far is that it was a major religious center created with technical knowledge pre-dating that found at Minoan Knossos by at least 400 years, indicating that it played a significant role in the development of Greek civilization.

The barren islet of Daskalio lies just of the coast of the island of Keros, which is one of the Cyclades islands in the Aegean Sea, and was once part of Keros before sea-levels rose. Daskalio has been the subject of intense archaeological investigations since 2015 when an undisturbed site was located.

The research is being carried out by a multinational team, supported by the Greek government and the British School in Athens. The large-scale project is being funded by several international institutes.

The project is led by Colin Renfrew and Michael Boyd and has found ‘the earliest truly monumental complex of buildings ever unearthed anywhere in the Greek world’ reports The Independent.

The islet had a settlement with metal-working shops, buildings, and even indoor plumbing, and all of this a millennium before the Minoans, who are often thought of as the first European civilization. According to the Keep Talking Greece website, the team of archaeologists has uncovered ‘a complex, stratified and technically expert society’.

Daskalio has a distinctive pyramid shape which is due to the extensive engineering activities of the ancient people of the Aegean islands. They deliberately exaggerated the pyramidal shape of the rocky outcrop by creating a number of huge terraces on Daskalio, that measured in total about 1,000 feet (300 m).

There were 6 terraces and upon them were built a number of buildings, mostly in marble. Some of the buildings were two floors and had staircases and were built using marble. The cultural landscape was built within a four-decade period and based on a single design.

The complex has been dated to about 4,600 years ago. It is believed that the pyramid-island was a religious site that attracted pilgrims from far and wide, who buried small statues here as sacrifices to unknown deities. The summit of the pyramid- islet was an open-area possibly used for sacrifices or votive offerings. The identity of the gods that were worshipped here is unknown.

There is no arable land on the rocky outcrop and little on Keros. Therefore, the inhabitants of ancient Daskalio may have been dependent on religious pilgrims and also engaged in trade.

Keep Talking Greece reports that archaeological finds indicate that the settlers’ “trade extended over a wide network reaching beyond the Cyclades.” There is evidence that the inhabitants specialized in metallurgy and they may have traded their metal products for food and other goods. Such a huge complex required a great deal of labor and organization, especially to bring the marble from the quarries on Naxos that was used in its construction.

According to the Independent, it is estimated that at “least 3,500 maritime voyages to transport between 7,000 and 10,000 tonnes of shining white marble.” This indicated that the builders of the complex were already great mariners and shipbuilders.

The huge scale of the work required would suggest a powerful and unified state or a league of smaller political entities. It is probable that the site was related to the first Hellenic state in history.

The engineering, complexity of the organization, shipbuilding and metal-working needed to achieve the building of such a place indicates that this civilization was already quite advanced by this time indicating the culture had existed and had been developing for hundreds of years or more. This political entity was at least contemporaneous with and may have influenced the development of the Minoans in Crete and later the Mycenaeans.

It appears that the Bronze Age complex was part of a wave of similar monumental buildings that occurred around the world at this time. This was a result of new technologies or the exchange of new ideas, spread via trade routes.

The pyramid shape of the islet would seem to indicate the influence of Ancient Egypt, who associated this shape with their creator-god. It is possible that the pyramid-shaped island represented to the early Greeks, the land rising from the primordial sea, a belief inspired by Ancient Egyptian myths.

The construction of the pyramid-shaped complex is arguably related to the importance that the Greeks attached to mountains in their religion. For example, Mount Olympus was regarded as the home of Zeus and the other deities in their mythology.

It is reasonable to assume that the idea that mountains were sacred may have originated in the Cyclades and indicates that the Aegean islands played a decisive role in the religious development of the Ancient Hellenic World.

The Independent quotes Michael Boyd, saying that the team’s research “suggests that these very early Greeks were organizationally, technically and politically much more advanced than previously thought.” This may indicate that the Cyclades Islands were possibly the cradle of Hellenic civilization. Their religious ideas, technology, and political organization may have influenced the Minoans and in turn the Greeks on the mainland.

It seems likely that the pyramid-island will continue to provide more insights into some of the earliest Hellenic societies.