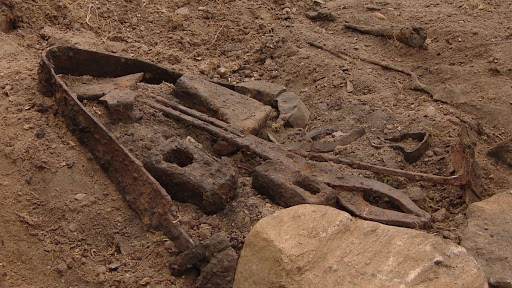 Last autumn, farmers Leif Arne Nordheim borrowed a backhoe from his neighbor to remove some pesky flagstones from his garden in Sogndalsdalen on the southwestern coast of Norway.

Lifting the last flagstone revealed tools — a hammer and tongs — which Nordheim first assumed were of relatively recent manufacture.

When he found a bent blade, he realized it was likely archaeological and called in the county Cultural Department.

Archaeologists from the University Museum of Bergen soon followed and an excavation of the find site ensued.

The find turned out to be far greater than originally realized, and the ancient blacksmith tools were impressive enough already.

Archaeologists unearthed a large collection of forging tools and weapons, including three hammers of different sizes, two anvils, blacksmith tongs, coal tongs, a rake to remove coals, a tray used to add coals, a chisel, a scythe, a sickle, a drill, pieces of a grindstone, nails, a single-edged sword, an axe, two arrows, and a knife.

Underneath the tools and products of the blacksmith trade archaeologists found more personal items: a razor, beard trimming scissors, tweezers, a frying pan, and a poker.

The deepest layer of excavation contained ashes, charcoal, and small bone fragments. The pieces of bone haven’t been identified yet, but archaeologists believe they are human remains, likely the blacksmith owner of the marvelous tools above.

Between the ashes and bones fragments, researchers found the objects that the deceased was probably wearing when his body was cremated: beads and a bone comb.

In total, the excavation yielded about 60 artifacts and 150 assorted fragments. Forging tools have been found in graves before, but this is an exceptionally rich collection for a blacksmith burial. Indeed, it’s the richest burial, blacksmith or not, found in the area in years.

“We think that the blacksmiths’ contemporaries wished to show how skillful he was in his work by including such an extensive amount of objects. He might have forged many of these tools himself.”

“The grave gives the impression that this was a local blacksmith and he enjoyed a high status in his society beyond being his trade,” says [co-leader the excavation Asle Bruen] Olsen.

The design of the axe and some of the other metal objects dated them to the 8th or 9th century A.D. Subsequent radiocarbon dating confirmed the date of the burial to be around 800 A.D.

The artifacts are currently being conserved by experts at the University Museum of Bergen. Once they’re stabilized they will go on display, possibly in a dedicated exhibition.